What an Extraordinary Woman

I knew your mother Alma Schwartz from a long time ago. Her parents and Eddy were good friends of my parents. The Schwartz’s and my parents were among the founders and members of the first and only snynagogues in . Before their arrival from , , and other older communities around , was a pure Yankee town—virtually all white Anglo-Saxon Protestants—with a smathering of Irish Catholics and Italians. 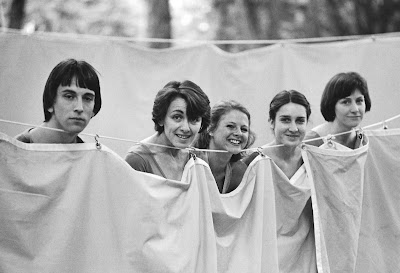 and Eddy were a few years younger than my parents and the other early members. Besides , they had a daughter named Ella who was five years older than . ( I don’t recall you mentioning Ella in your memoir.) I remember Lena as a good-looking woman (’s looks came from her mother, though Eddy was good looking, too. Sort of on the lines of Tony Curtis—who is of Hungarian –Jewish extraction.) Eddy’s background was a little different from my father’s and their friends. Eddy was a rough-scrabble  Jew who grew up in the tough Jewish neighbor-hoods of . I think helped him gain status and some culture, helping him blend in with the middle-class mores of the other Jewish families. Over the years, I would see Eddy at High Holiday services and watched him playing poker at our house. He was always smoking a cigar and seemed to be always louder and more boisterous than the others.

I first met at the Schwartz’s summer house in . As we drove into the driveway I saw this athletic girl water-skiing  in the distance. I never saw water-skiing before and the image of  her (she was probably 11 or 12 years old) bounding across the wake of the motor-boat left a lasting memory for me. 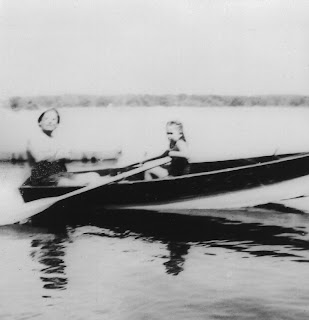 The next memory of her was seeing her at dancing lessons at the Jewish community center. She was enchanting, unlike any other Jewish girl I had ever seen. She had wavy, sandy blond hair, big, blue-eyes, pert little turned-up nose, (rarely seen in the semitic race and baby-face lips; and wearing  a tight- cut dress ( unlike the big skirted petty-coat fashions of the early 1950s) that suggested a small, but compact body and athletic legs underneath.. In short, she was every Jewish boy’s dream-girl. (And as I later found out she was every gentile boy’s dream girl,too.) I remember saying to her as we danced together for  the last dance of the lesson: “ I’ll be seeing more of you.” Oh, God! What a cool guy I thought I must have been back then! 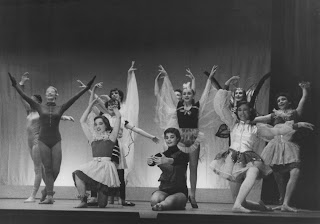 Since was in the class two years behind me, we didn’t meet up together until she was in the 9th grade of junior high school and I was in the 11th grade in high school. I don’t recall, but we probably met at Jewish community social functions, such as picnics and dances. All I think I remember is that when I thought of her I  I was in a state of spring fever, puppy love—holding hands, walking down a moonlighted road, humming “Gee but it’s great being out late, walking my baby back home….”

When entered high school, she was proceeded with a reputation of being pretty, fun-loving and as a sophomore she made cheerleader, which was a very select group. All the boys were crazy about her. She dated the school’s hockey captain and had no dearth of secret admirers. However, she was not a party girl. Her mother was strict and she discouraged from dating too many gentile boys. ’s free time was also very limited because of her devotion to dancing, classical and modern. Weekends, too, she went to dance lessons 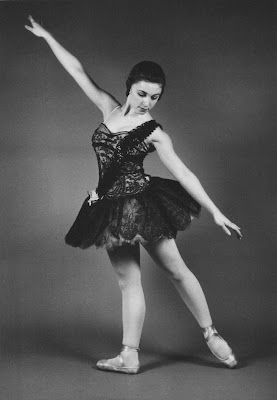 Since I was Jewish,  I had  some advantage in dating her. As you can see from the attached photo I got to take her to the junior prom. (Don’t feel sorry for your mother. I did turn out to look much better. Some Brits took me for Tom Jones, the British pop singer in the old days (1960s);others reminded them of Jean Paul Belmondo, the famous French gangster actor of the French new wave. I like to think your mother saw a little of Belmondo in me.

Besides her good looks, what was the other thing that I remember about ? She had or gave you the feeling that she had empathy. When she was with you, you felt she was really interested in you—what you thought about things, about people, about life. Looking you in the eyes, she would ask you how you feel about things, give you encouragement to do things you were hesitant or confused about. I didn’t realize it until I read your memoir was that your mother was a healer—a healer of the soul. ( Much later, I learned of others  who were  virtually “saved”  by ’s empathy. Another example of her caring is when my father died in 1980, so many years after we had known each other, she sent me a beautiful condolence letter. I was so surprised and touched  that she remembered me and my father and family  after so many years.) 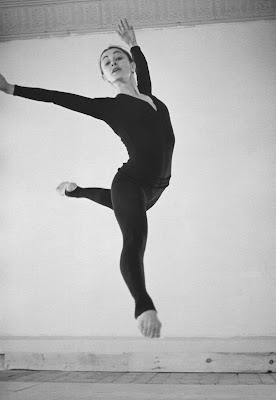 There was a darker side of ’s life. I remember in high school held several parties at her new house. Her father made a lot of money in real estate and he built a ranch house on  Belmont Hill—a very fashionable section of , which was a very affluent town. At one party—it was the last of these parties during my senior year—we heard  shouting and what sounded like fighting from a bedroom. Soon after, we were all asked to leave the house. I later learned that the shouting and fighting was with her father. And that this was just one of  an increasing number of fights and abuses of her alcoholic father to and her mother. You got to understand that we were so naïve and out of it in those days. The idea of a Jewish man that is an alcoholic that beat his family!  We didn’t think Jews got drunk like the Irish and Italians. Weren’t Jewish families like the ones in ”Fiddler on the Roof?”

After high school.  I didn’t see or hear anything about . I went to Harvard, then to , graduated and not long afterward became a journalist, working for Forbes, Newseek, and a Far East correspondent, covering and . I have been married for  47 years to a very smart and very good looking woman. We have a son and two grandchildren living in Denver.Colorado. But a strange coincidence happened when my wife and I returned from the . We needed a place to stay in where I got a job working for Newsweek. My wife’s sister had dated a man named David Satchi, who was from a wealthy Jewish Iraqi clan. David, who was out-of-town at the time, generously let us stay in his nice brownstone apartment in mid-Manhatten. When we moved in, I saw on the night table a picture of—it was .. 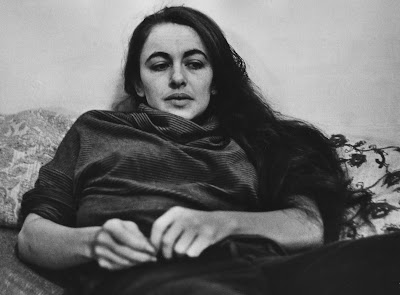 I learned later that David was madly in love with , but she said that she was not ready for marriage and she was dedicated to pursuing a career in dancing.  In another incredible coincidence I met at a subway station. We talked briefly before our trains parted us in different directions.. Before departing, we said we would get together and catch up, but we never did.  Subsequently, I learned that had gone to to study under a famous dance teacher. That she didn’t make it because her body-type was  not that of a dancer. I learned nothing more about where she was and what she was doing. Until….

My family and friends were traveling in and we stopped in . While walking the streets I noticed a small alcove with a dance studio. There was  under  the name of the studio a picture of , sporting a French cap looking like a celebrity. I rang the bell and knocked on the door but she wasn’t there. Over the years, I traveled through a few times. There was the same photo of her at the studio, but the studio was never open.

Then several months ago,  your memoir describing your emotional journey in search of  your mother came across the Internet. What a thrilling revelation it was for me to find out what an extraordinary woman and the extraordinary life your mother had.

David Kales has been a journalist, editor, and free-lance writer for over forty years. His journalist experience includes Newsweek, Forbes, INC magazine, and foreign correspondent for the Hearst Newspapers, covering the Vietnam War and Southeast Asia. He has written several books, including "All About the Boston Harbor Islands." "The Phantom Pirate" is his first work of fiction. 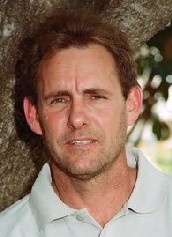 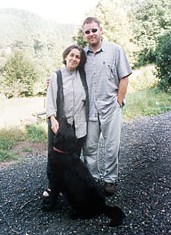 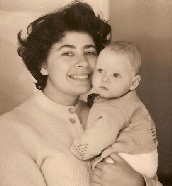 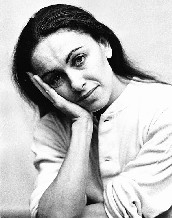 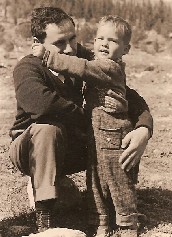